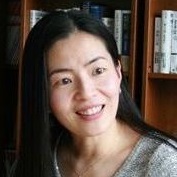 We are pleased to announce that Yukiko Nishimura, President and Founder of NPO ASrid (Advocacy Service for Rare and Intractable Diseases’ stakeholders in Japan), has been elected as Vice Chair of the Patient Advocacy Constituent Committee (PACC) for a period of 3 years, starting her mandate on March 1, 2018. In her position as PACC Vice Chair, she is interested in providing a voice to patients in Asia by bringing her experiences as a caretaker parent and her passion for patients, families, and society’s role in research. Yukiko Nishimura has worked with stakeholders from Japan and all over the world for over 10 years. She has been inspired by the way rare disease challenges have been addressed in other parts of the world and aims to support people touched by rare diseases and build bridges across stakeholder groups.
She takes over the Vice Chair position from Béatrice de Montleau, the previous representative from EURORDIS–Rare Diseases Europe, who left IRDiRC after more than 7 years of fruitful collaboration.

Capitalizing on the momentum of progress made in rare diseases research over the past six years, the International Rare Diseases Research Consortium (IRDiRC) devised a new set of global rare disease goals for the upcoming decade. In August 2017, IRDiRC raised the bar for all stakeholders working on rare diseases, as the Consortium presented its audacious vision for the field, all with patients’ lives in mind:

Enable all people living with a rare disease to receive an accurate diagnosis, care, and available therapy within one year of coming to medical attention.

In order to work towards this ambitious vision, IRDiRC has set three goals for the next decade:

To tackle these goals, following extensive and collective discussion and prioritization, the Consortium defined its new roadmap for 2018 which includes actions to accelerate research and development in rare diseases, and to remove numerous barriers and bottlenecks. These actions are aimed at improving research funding and coordination, identifying strategies to diagnose unsolved cases, facilitating data collection and sharing, advancing therapy development, boosting patient engagement in research and enabling international collaborations. IRDiRC Committees and Task Forces will deliver a series of recommendations for policies and standards, tools and infrastructure development, and adoption of best practices in response to the needs of the rare disease community. 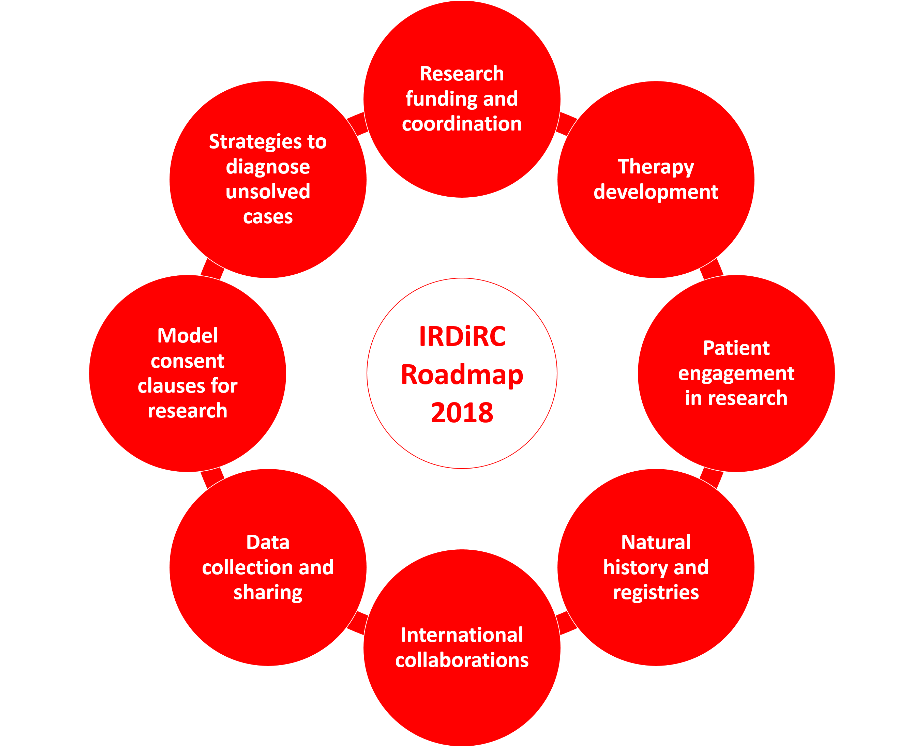 The year 2017 was a very rich and productive one for IRDiRC: 9 new members, 8 scientific publications, 6 new IRDiRC Recognized Resources, the official start of 3 Constituent Committees, and most significantly, the unveiling of 3 new goals supporting IRDiRC’s new vision for the next decade.

In February, IRDiRC organized its 3rd conference in Paris, France, to celebrate the considerable progress on its original goals in the past 6 years: the goal to deliver 200 new therapies was achieved in early 2017 – three years earlier than expected – and the goal for diagnostics is within reach. It signaled the time to look ahead to new challenges and shape IRDiRC’s vision for 2017-2027.

At the same time, the Constituent Committees started their activities with the mission to better coordinate, enhance information exchange and identify actions towards IRDiRC objectives. These committees are currently under the leaderships of:

In April, IRDiRC updated its governance to reflect the evolution of the Consortium and additionally empowered patient advocate groups to apply for IRDiRC membership. This call was heard as IRDiRC counts currently 6 additional patient advocacy organizations as members, in comparison to 3 in 2016.

In August, concomitantly with the publications of 3 vision and goal articles (1, 2, 3), IRDiRC announced its new vision and goals for the next decade via a press release that was widely disseminated to the members’ network. Additionally, IRDiRC also published articles on its Policies and Guidelines, A Global Approach to Rare Diseases Research and Orphan Products Development, International Cooperation to Enable the Diagnosis of All Rare Genetic Diseases, and the position statement of the Patient-Centered Outcome Measures Task Force, while contributed to some others, as on the importance of international collaboration for rare diseases research. More publications are currently in preparation to further disseminate the activities of the Consortium.

With the new goals in place, the Constituent and Scientific Committees set out to conceive and propose actions to support and advance these objectives. The first steps in the creation of the new roadmap for IRDiRC were presented at the Consortium Assembly meeting that took place last November in Tokyo, Japan. The Consortium is currently in the process of analyzing and prioritizing the proposed actions, and aims to deliver an aspirational and pragmatic roadmap in early 2018.

Through 2017, IRDiRC welcomed a total 9 new members. Among the 54 members, 31 participate as funders, 14 for companies, and 9 patient advocacy organizations. Importantly, the global coverage of the Consortium also expanded as IRDiRC welcomed its first members in India and South Africa while strengthening its presence in Australia, Canada, China, Japan, UK and USA. IRDiRC looks forward to welcoming more members, in particular from regions that are currently under-represented, ensuring their vital voice, experience and input are integrated into global rare diseases research agenda, bringing diagnostics and therapies to patients globally.

In rare disease research, data are scattered and the number of patients is often small, making critical the need for collaboration. The IRDiRC Policies and Guidelines were set out to address best practices in term of data/expertise sharing, integration, use of resources in rare diseases research. A change in how science is performed in addition to the involvement of all stakeholders (scientists, clinicians, patients, industries, regulators) is key to achieve efficient international collaboration.

One of the efforts to widely disseminate these guiding principles was achieved through a publication in the European Journal of Human Genetics. The Policies and Guidelines, ratified by IRDiRC members for implementation in their rare diseases research program, are structured around 11 major topics: data sharing/standards, ontologies, diagnostics, biomarkers, patient registries, biobanks, natural history, therapeutics, model systems, publication/intellectual property and communication. In addition to developing new initiatives based on these principles, IRDiRC will also continue its efforts in further disseminating the Policies and Guidelines as well as assessing their impact to update them when required.

For details, please read the full article and the IRDiRC Policies and Guidelines document.

The aim of clinical trials is to evaluate the effectiveness and safety for patients of a medical intervention, based on comparable results: the outcome measures. Despite guidance documents on outcomes, many trials, on rare diseases in particular, still do not include standardized outcomes. This situation leads to failures in late-stage of orphan drug development or simply difficulties to prove their clinical effectiveness.

The paper published in the Orphanet Journal of Rare Diseases is a position statement based on the work and discussions done by the IRDiRC Task Force on Patient-Centered Outcome Measures (PCOM). The authors, Thomas Morel and Stefan Cano, emphasize on PCOMs being the best opportunity to obtain a meaningful and interpretable measure of the patient benefit. While PCOMs are still largely omitted across the medical and research community, in particular for rare diseases, fully embracing PCOMS would lead into a win-win scenario for patients, clinicians, researchers, regulators, health technology assessment and payers. The authors described the benefits brought by PCOMs as following:

The authors describe methods used in PCOM research with their advantages and constraints as well as the key role often played by patients’ organizations in leading patient outcome measurement initiatives. They also discuss how PCOMs can be applied to rare diseases. While it seems unrealistic to develop PCOM specifically to all rare diseases, the careful examination of existing tools and their (re)use is worth considering. Finally, the authors defined 5 principles that should guide the development meaningful PCOMs for rare diseases: Collaboration, Alignment, Integration, Innovation and Communication.

For details, please read the full article and the PCOM Task Force‘s report

Enable all people living with a rare disease to receive an accurate diagnosis, care, and available therapy within one year of coming to medical attention

Read more about our goals

This site is provided on an “as available” basis. While IRDiRC believes the content on this site to be correct, IRDiRC makes no representations or warranties regarding the accuracy, completeness, currency or intellectual property rights of or relating to any content displayed.